Team Fairfirst once again portrayed their prowess by winning the 2022 Mercantile League Netball Tournament Open Mix Division, beating Citizens Development Business Finance (CDB) by 21-5 at the St. Joseph’s College Indoor Stadium in Colombo. Over the years Fairfirst Insurance was able to secure several titles at netball tournaments, through which they sharpened necessary skills [...] 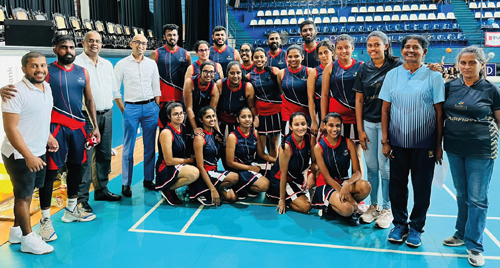 Over the years Fairfirst Insurance was able to secure several titles at netball tournaments, through which they sharpened necessary skills to become the champions this year. Both the Women’s and Mixed teams portrayed their noteworthy talents by giving their maximum effort. The Women’s team won fourth place in Division ‘C’ while the Mixed team emerged champions among eight teams competing under two categories. In addition, Nimesh Fernando won the special award as the Male Player of the Tournament while his team was recognised with an award for the Best Team Attire.

“Winning this championship was a really good feeling. There are two factors that I believe were the reasons for this win. The dedication and commitment of my team and coach, and the company’s continuous support to its employees in their passions and interests. We hope to maintain this momentum and take Fairfirst even higher,” commenting on the win, national basketball player and the captain of Fairfirst Mixed netball team, Shehan Udayanga stated.

“Having witnessed the journey that our team has had over the years to achieve this feat has been an immense pleasure. Fairfirst knows that having fun at work is vital for everybody to deliver their best performances. We encourage our employees to shine in their preferred activities. We have learnt from experience that the happier the work environment is, the better the performance,” Dhilan Mitchell, the Chief Operating Officer and the manager of the Fairfirst netball team said.