The Danushka Gunathilaka (DG) scandal in Australia brings to the surface in no uncertain terms the somewhat sordid state of affairs in Sri Lanka sports. No doubt the economic circumstances are one reason for this decadent trend, but it is also necessary to examine the cultural undercurrents that makes our behavior somewhat pathetic in the [...] 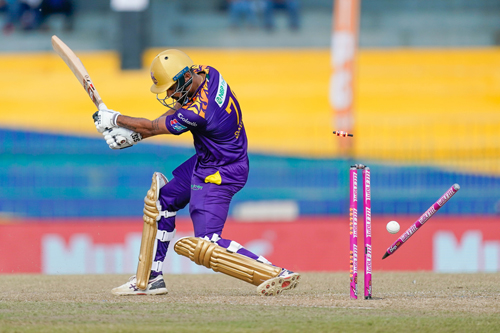 In cricket even if one gets clean bowled, there's always another innings, but it's a totally different perspective when it comes to life, especially when one is a celebrity - File pic

The Danushka Gunathilaka (DG) scandal in Australia brings to the surface in no uncertain terms the somewhat sordid state of affairs in Sri Lanka sports. No doubt the economic circumstances are one reason for this decadent trend, but it is also necessary to examine the cultural undercurrents that makes our behavior somewhat pathetic in the arena of international sports, where fair play, performance and meritocracy are perennial watchwords!

The affable Minister of Sports (MoS) was quick to submit an apology to the Australian authorities while the rotund and wily World Cup winning captain of past glory was quick to castigate the cricket authorities and call for an interim administration. As if to atone for its sins, the Sri Lanka Cricket (SLC) makes generous donations; noble indeed. The question is whether it should stop there? Why not examine the antics of the ministry itself because as the saying goes, a fish rots from the head downwards!

Time and again, we have seen that the ministry itself is slow on the draw! They only seem to arrive at post-mortems, but hardly addresses the preparation of international competitions in a timely manner. The National Olympic Committee (NOC) is also on the same wave length. They both leave the result in the hands of the National Federations (NFs) but are quick to bask in the glory whenever a team or individual athlete comes good.

Which begs the question, what is the purpose of a MoS, if that really is the retarded quadrant of responsibility, it bears? It’s Chief Executive, the Director General plays ‘pooja’ (prayers) to his political masters and hardly plays a role except to ponderously state, no comment! As we have seen in the body politic of this country and as enunciated by the President in his budget speech; what this country requires is a system change and that applies to sports too!

In the cricket front, reports from Australia indicate that the Sri Lanka team was partying, as if there was no tomorrow! It also suggests that many players are involved in business matters, which also extends to SLC officials, who it is believed are in the vanguard of such dealings.

So, was cricket merely on the backburner? We were Asian champs and probably missed out of a semi-final berth at least. Did these distractions affect our overall performance? A proper inquiry and report in the public domain is important if we are to arrest such frivolous participation in the future. The Danushka Gunathilaka saga will play itself out, much to the disgrace of a nation mired in an economic collapse brought about by poor governance and rampant corruption.

Take the case of Rugby! We managed to participate incognito in the Asian Rugby 7s where the men’s team was pushed into fourth place and the women’s team to sixth place, out of a total of eight teams. But all that is now overshadowed by the disappearance of the Sri Lanka women’s captain who has gone missing. The MoS scuttled the Rugby Union owing to a ministerial tackle and strenuous efforts made it possible to enter this competition, only to return with egg on our faces! Now, where does the blame lie?

Spare a thought for football. With the World Cup kicking off today, the Football Federation of Sri Lanka (FFSL) is in the doghouse awaiting an election which the courts imposed following the heavy infighting that has taken place among factions at Football House. The MoS that was privy to the machinations just across its Reid Avenue grounds, could not separate the wood from the goalposts and allowed the skullduggery to fester. Periods of office were shoved forward and backwards, which fans suspect was a ploy to allow the bandwagon to Qatar.

Even now, allegations that tickets have been purchased for officials to attend the FIFA World Cup are circulating among the public. It will indeed be interesting to see who will go on the Qatar ‘savariya’ (trip), if indeed the FFSL has been disbanded?

So what is apparent, is that save for a few sports, most are being held to ransom by administrators who simply want to remain in office and book their seats on every tour that comes by! It is a veritable musical chairs among these panjandrums who play ball with the authorities to ensure such privileges are secure.

The National Sports Council and its appendage, the National Selection Committee must put in place stringent pre-qualifications for all officials on tour and not limit their mandate to the athletes only. They must be contracted and held accountable for performance as well as behaviour on tour, so that Sri Lanka does not add insult to injury in its overseas sojourns!

The NOC must be a partner in this exercise. They have the international expertise to pursue the highest standards that we must aspire to, and reverse the decadence that mars our sports and sucks us into the quagmire we create for ourselves!