While the current cricket selectors have not yet being sacked, the Sports Ministry has called for replacements on the back of the team’s dismal performance at the recent T20 World Cup. Led by former Sri Lanka fast bowler Pramodya Wickremasinghe, the six-member panel was appointed in April 2021 by the then Minister of Sports, Namal [...] 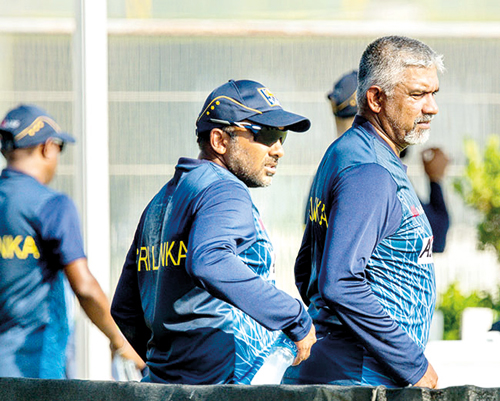 Chief selector Pramodya Wickramasinghe, the on-tour selector at Sri Lanka's recent tournaments, has been doing a decent job with his team

While the current cricket selectors have not yet being sacked, the Sports Ministry has called for replacements on the back of the team’s dismal performance at the recent T20 World Cup.

The current Asian champions, Sri Lanka, exited the World Cup at the group stage, having managed just two wins out of five games in the Super 12 round. Adding to this was the arrest of Danushka Gunathilaka over charges of sexual intercourse without consent during the ICC T20 World Cup in Australia with a woman he found on Tinder — a dating app. Gunathilaka was released on bail on Thursday under strict bail conditions including a surety of AUD 150,000.

“We have got instructions from the Ministry of Sports to send 10 names of prospective candidates to be considered as selectors,” said a senior official of Sri Lanka Cricket (SLC).

The Sri Lanka selectors are appointed by the Sports Minister—a power given under the Sports Law, even though he depends on the national sports bodies for recommendation of nominees.

Though Wickremasinghe is not as high profile a cricketer as some of the big names that held the position of chief selector in the past, the former fast bowler and his team did a decent job since taking over.

Sri Lanka won six of the 12 Tests contested during the period, losing four and drawing two. In white-ball cricket, the selectors were more ruthless in their policy. A youth-centered plan saw some of the seniors, including star all-rounder Angelo Mathews and then ODI skipper Dimuth Karunaratne, being axed. The road is long and hard for the islanders to become one of the top limited-over sides in world cricket.

But the team has shown steady improvement. They won three out of the six ODI series contested during the period including three straight home series wins against South Africa, Zimbabwe and Australia.

In T20 cricket, their record stands at 23 wins to 18 defeats. During the same period Sri Lanka competed in two T20 World Cups, including this year. Both times, however they were thrown out of the first round. However, they won the Asia Cup, Sri Lanka’s fifth title this year, but the team’s performances at the recent T20 World Cup have left many questions in need of answers.

The Ministry has so far delayed signing off the squad selected by Wickremasinghe and Co. for the three-match ODI series starting this Friday (25) at Pallekele, as it is reportedly unhappy with Chamika Karunaratne’s axing from the side following a poor bout at the World Cup. Social media pundits argued that, though he is out of form in T20 cricket, he has done well in ODIs in the past and he should be retained in the side. Karunaratne scored a run-a-ball 75 in his last ODI match.