Hyacinth Wijesinghe, the coach of Sri Lanka’s netball team that won the Asian Championship last year, stepped down on personal reasons effective Friday, days ahead of her year-long contract expires on January 31. Despite applying, and later deciding to withdraw, Wijesinghe had made up her mind to move on in spite of knowing she’s likely [...] 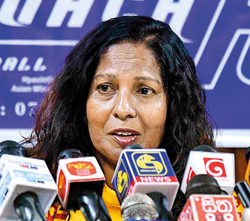 Hyacinth Wijesinghe, the coach of Sri Lanka’s netball team that won the Asian Championship last year, stepped down on personal reasons effective Friday, days ahead of her year-long contract expires on January 31.

Despite applying, and later deciding to withdraw, Wijesinghe had made up her mind to move on in spite of knowing she’s likely to get it renewed. The renewal order also came from the National Sports Council (NSC) Chairman Arjuna Ranatunga, citing her experience and success she has tasted in the sport.

Today, another round of discussion with the other candidates will be held. However, it is also anticipated that today can mark the final day of candidates’ discussions. Allocated a monthly salary of Rs.150,000, a sum of Rs.50,000 from the federation and the rest from ministry, she had been unpaid for months, she revealed.

The only consolation was in October, the victorious month of the becoming the Asian queens, where she was paid Rs.50,000.

“There is no professionalism,” she said.

Thilaka Jinadasa and Sobhitha de Alwis are the other contenders, and Wijesinghe feels the latter can be named as her successor. Announcing her decision to reporters on Friday, she reasoned out her call to quit, openly blaming the netball administration.

She openly accused the federation and fired at her President, Lakshmi Victoria and Wijesinghe’s assistant coach, for providing evidence against on her on an inquiry, caused after fellow and former national coach Deepthi Alwis complained that her daughter was not drafted into playing side of the Asian Championship matches.

Wijesinghe denied and disclosed she (Alwis’ daughter) eventually played at least one match.

“When they delivered their testimony against me, I was disheartened despite working in close quarters. I was cornered, ill-treated and harassed since September 15. Despite going in search of answers, I only remained unanswered,” the former national captain explained.

Since triumphing the Asian Championship, she said for four months, they have not had any training or preparation, whatsoever.

“We need a plan. But in order to carry out that plan, we only have an inexperienced president, who does not desire to work with experienced hands and acts based on her whims and fancies”.

“No other country goes for a World Cup, with this kind of preparation”.

The netballers earned their qualification to this July’s World Cup in South Africa, after being crowned as the Asian champions in Singapore last year.

“My sole focus was to give our best performance at the World Cup. The best results of finishing in Top 12 was recorded under my coaching. I wanted to better it, however, we cannot deliver at this rate”.

The two-time Asian Championship-winning coach resigning does not rule out a return to the same job, provided it comes under a new administration, she said.

“I will return solely and strictly if it’s under a fresh administration,” she reiterated.

Ending a second and a successful stint, the 61-year-old claimed she walked out having the full faith of the team.