A late burst by hosts CH&FC failed to prevent defending champions Kandy SC from recording a stunning 27-25 win in their second round SLR Nippon Paint Club Rugby League Championship match played at the Racecourse yesterday. Despite leading by a healthy 17-8 at halftime, Kandy were provided the scare of the lives before walking off [...] 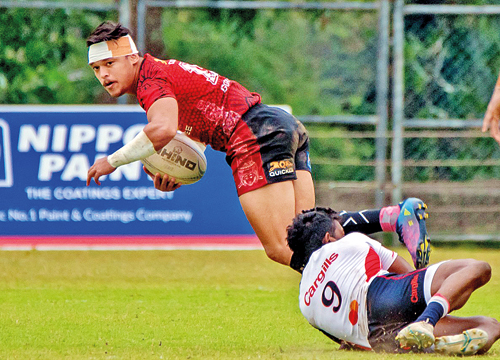 CH played their hearts out, but fell short by a whisker

Winger Kavindu Perera accounted for the first try for Kandy within the first five minutes of the game, which went unconverted, as the in-form flyhalf, Tarinda Ratwatte braced the second unconverted try points to the tally with a penalty in the 11th minute to give their side a 10-0 lead.

CH responded in similar fashion, first off a try from centre Ovin Hettiarachchi in the 16th minute, followed by a penalty from winger Hirusha Sampath in the 28th minute to level the scores 8-all. But after a brilliant counter attack Kandy managed to regain their lead from a try off forward Uchitha Jayasuriya, as Ratwatte added extra points to make it 17-8.

Five minutes after the resumption winger Sampath put over a penalty successfully to cut down CH’s deficit to 11-17, but it was further expanded by a Ratwatte penalty 10 minutes later 18-11. The home team regained momentum in the 63rd minute, as flanker Yoshitha Rajapaksa landed a try, and with Sampath’s conversion the trailed close by 18-20.

But with 10 minutes to go CH lost winger Avantha Lee for a red card offence, as prop Chathura Soyza led Kandy to a brilliant forward move to score in the 74th minute. Centre Nigel Ratwatte put over the conversion as Kandy expanded their lead further to 27-18. A late try by Yoshitha Rajapaksa, his second of the game two minutes before the full time, and the conversion from Sampath still didn’t help CH to surpass the defending champions, who recorded a thrilling 27-25 win.