Sri Lanka is currently heading towards a youth bulge, with an increasing unemployed youth population, when the world population passed the historic eight billion mark on November 15. The world population has increased eight fold within roughly 200 years, with the population of 1800 being one billion, said Prof. Indralal de Silva, Emeritus Professor of [...]

Youth bulge for Sri Lanka; unemployment among young people on the rise

By Senuka Jayakody
Shrinking private sector and plans to reduce public sector contribute to lack of jobs for youth
View(s): 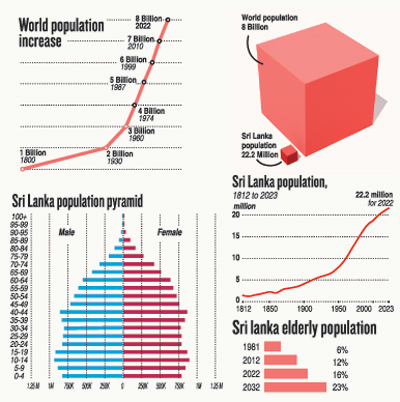 Sri Lanka is currently heading towards a youth bulge, with an increasing unemployed youth population, when the world population passed the historic eight billion mark on November 15.

The world population has increased eight fold within roughly 200 years, with the population of 1800 being one billion, said Prof. Indralal de Silva, Emeritus Professor of Demography at the University of Colombo.

He said the world can expect a population between nine billion and 11 billion by 2050, depending on fertility rates and life expectancy.

A projected value of 22.2 million people for 2022 could be assumed, while the next census would arrive next year. If these trends continued, Sri Lanka’s population could increase to 23.8 million by 2032 and 25 million by 2042.

Sri Lanka was also experiencing a rapidly aging population. According to Sri Lankan standards which consider 60+ as elderly, in 1981, only six percent of the population was elderly. However, by 2012, the elderly population was 12 percent and in 2022 it may be 16 percent with a further increase expected up to 23 percent in 2032.

Interestingly, an increase in the youth population was also observed. The main reason was the upturn in fertility rates in the start of the 21st century, which had been declining from the 1950s, when a female produced five to six children, to around two children in 1990.

Contrarily, in the beginning of the century a female produced 2.3 to 2.4 children, where children born in the first decade would become the youth population in the decade 2021 to 2030. Sri Lanka once again experienced a decrease in fertility rates from 2015 onwards.

However, Sri Lanka was also currently experiencing a decrease in jobs for the youth population despite an increasing labour force. In 2012, in a 7.8 million working force, less than 400,000 were unemployed, whereas in 2022, unemployment had increased to around 700,000 in a working force of 9.4 million.

The migration parameter, which also affected the Sri Lankan workforce, was also seen to be declining. In 2014, more than 300,000 migrated for labour, while the number depleted to 55,000 in 2020 due to the Covid-19. Last year, 120,000 people migrated for work, while more than 200,000 migrated so far this year. More people were expected to migrate for work on tourist visas in the near future.

Prof. de Silva said Sri Lanka was approaching the last part of the demographic dividend, passing the beneficial early and middle stages, with only a short period remaining.

“Sri Lanka has “missed the train.” If we want to reap the benefits, we have to work extremely hard at all levels. But are we in a position to do it? It also requires a significant contribution from the youth, but to what extent will the youth contribute?” he asked.

President in North, sub-office set up for reconciliation

No police fuel for ministerial security

COP27 agreement on food security, but no deal on funds

Glyphosate for all agriculture sectors

Critical Zones – int’l exhibition on environment on in Colombo

Human and canine at risk

Live and let live with elephants is the next wild idea