A Presidential Secretariat Sub office of the Northern Province Development Special Unit was declared open yesterday by President Ranil Wickremesinghe with an assurance to resolve the outstanding land and other issues. The sub-office will coordinate with the Presidential Secretariat on development activities and reconciliation matters, Vavuniya District Secretary P.A. Sarathchandra told the Sunday Times. President [...]

President in North, sub-office set up for reconciliation 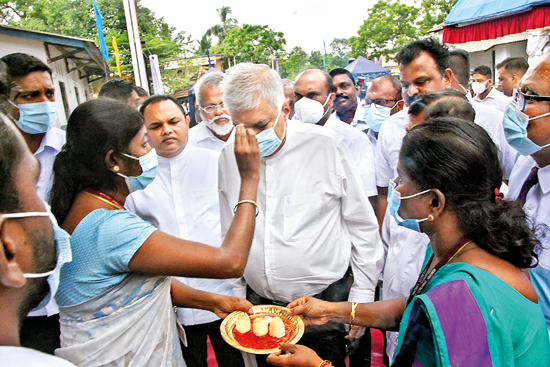 President Ranil Wickremesinghe is seen being welcomed by two ladies who place the traditional pottu on his forehead when he visited Vavuniya to open the sub-office of the Presidential Secretariat. Pic by Sithum Chatturanga

A Presidential Secretariat Sub office of the Northern Province Development Special Unit was declared open yesterday by President Ranil Wickremesinghe with an assurance to resolve the outstanding land and other issues.

The sub-office will coordinate with the Presidential Secretariat on development activities and reconciliation matters, Vavuniya District Secretary P.A. Sarathchandra told the Sunday Times.

The President assured that he would appoint eight committees at the provincial level to resolve land issues. He gave this assurance on the first day of his two-day visit to the Northern Province.

Rural Economy State Minister Kader Masthan told the Sunday Times that MPs and officials drew the President’s attention to the northern people’s issues such as illegal encroachment, land grabs by security forces and state agencies such as the Departments of Forest Conservation (DFC), Wildlife Conservation (DWC), and Archaeology. They also raised the issue of the lack of deeds for landowners.

He said agencies such as the DFC and DWC were periodically issuing gazette notifications bringing many private and state lands under their purview, and this matter was also raised with the President. The MPs demanded that these lands be released to their original owners and for investment purposes, noting that foreign investors, the Diaspora and local businesspeople were willing to begin major agriculture and dairy sector projects in these areas.

The President, meanwhile, told the gathering that the government had set in motion a five-year plan to develop the country’s economy from 2023 to 2027 through the 2023 Budget.

Special attention was also focused on the housing problem of the northern people. Officials pointed out that the housing projects initiated to address the issue in the three northern districts had reached different stages of construction and an additional Rs. 3000 million was required for their completion.

The need to improve the living conditions of the people in the province, renovation of tanks, solutions to the fertiliser problem, health-related issues, including the shortage of doctors, and streamlining distribution activities were also discussed at length during the meeting, the Presidential Media Division said.

The President acknowledged that many unsolved problems remained in the North, but assured he would resolve those issues after talks with all parties.

Meanwhile, families of missing persons tried to hold a protest outside the Vavuniya Secretariat when the President arrived there. However, police dispersed the protesters.

No police fuel for ministerial security

COP27 agreement on food security, but no deal on funds

Glyphosate for all agriculture sectors

Youth bulge for Sri Lanka; unemployment among young people on the rise

Critical Zones – int’l exhibition on environment on in Colombo

Human and canine at risk

Live and let live with elephants is the next wild idea