Aiyo Sirisena, You are all over the news these days. If people thought they got rid of you when you ended your rather controversial term of office, you have proved quite clearly that they were mistaken. Although you are in the news for the wrong reasons, I am sure you enjoy it too. What brought [...]

You are all over the news these days. If people thought they got rid of you when you ended your rather controversial term of office, you have proved quite clearly that they were mistaken. Although you are in the news for the wrong reasons, I am sure you enjoy it too.

What brought you back to the headlines this week was the verdict given by the highest court of the land. They held that you were, in a way, responsible for the Easter Sunday attacks because you didn’t do your job properly. You didn’t supervise those in the defence establishment well enough, they said.

You must be annoyed that you are being asked to pay the highest amount. Those such as Hemasiri and Pujith have been asked to pay less. Presumably, that is not because you are richer than them. They felt you were more culpable than the others though you say you weren’t informed of an impending attack.

I don’t know whether it is sheer bad luck or the poor decisions that you take, Aiyo Sirisena, but whatever you do appears to come back to bite you. Remember, when you sacked Uncle Ranil and installed Mahinda maama – who you claimed would send you six feet under – as your PM?

That triggered a 51-day constitutional crisis that ended only when the highest court of the land reinstated Uncle Ranil. In doing so, they slapped you on the wrists saying that what you did was unconstitutional, a rebuke no other leader has earned from the highest court. Well, not yet anyway. 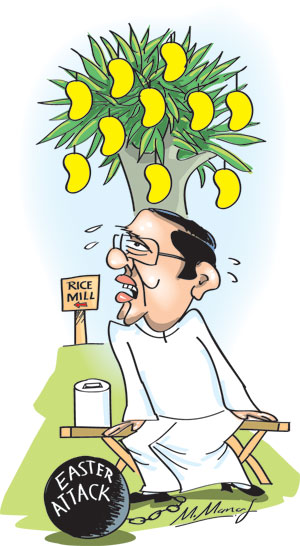 Then, facing a barrage of criticism after the Easter Sunday attacks, you appointed a commission to probe the incident hoping the dust will settle after that. The commission that you yourself appointed found fault with you and recommended that criminal proceedings should be commenced against you!

By the time that commission finished their work and handed over their report, you had left office and Gota maama was in charge. He was not in a great hurry to act on those recommendations though. He probably wanted to keep it as an ‘insurance policy’ against you deserting the ‘pohottuwa’ camp.

Even the verdict last week that imposed the Rs 100 million fine on you was only made possible because the Constitution was amended to allow fundamental rights cases against the President. And guess who first introduced that change? It was you, through the 19th Amendment!

You are not very high in the popularity stakes now. There are many who are rejoicing after hearing of the court verdict imposing a penalty you. Others want you prosecuted on criminal charges. Then there is Satellite complaining that you ruined the party that her father formed and her mother nurtured.

I won’t blame you if you feel that even those who you helped have let you down. For example, those who presided over the decision to claim compensation from you, were appointed by you. Then, the other day, we heard the Field Marshall yelling at you in Parliament. It was you who restored his rank!

You must also be quite annoyed that while there is all this hullabaloo about your negligence that led to the Easter attack, the real masterminds behind the attack have never been revealed. With all the attention being on punishing you, no one is bothered about finding out who really planned the attack.

The only people who seem to be on your side are those who opposed you previously. Even Wimal, who was shouting ‘ko me Sirisena’ from Mahinda maama’s campaign platform appears to have found a new friend in you although, with friends like him, you won’t be needing any enemies.

Anyway, Aiyo Sirisena, you tell us now that you don’t have the money to pay this compensation. I would have thought the most logical thing to do was to ask brother Dudley for a small ‘atha maaruwa’ or loan. All that would have done is push up the price of rice a bit and no one would notice.

However, you say that Dudley won’t dole out a cent for you and that all you have is a few acres of a mango plantation as your assets. You also say you will even beg for money from the people or, if that isn’t enough, you are prepared to go to jail. Knowing you, that is just the kind of thing you would say.

If you really want all of us to contribute towards the compensation you have to pay, each and every man, woman and child in Paradise will have to pay about Rs 4.50 to raise that Rs 100 million. Between that, and seeing you in jail, it is not a very difficult choice, Aiyo Sirisena!

PS: You can get away with anything when you are the boss because of immunity but once you are out of office, it is payback time. You had criminal proceedings recommended against you and now, a compensation claim. Do you think someone else should be more careful about what he is doing now?