Tamil political parties may have many political-ideological differences among them but when it comes to calls from ‘Big Brother’, they seem to have united or at least pretend to be on the same front. That call came from the Indian High Commission to facilitate a meeting with visiting External Affairs Minister S. Jaishankar. Accordingly, almost [...]

Tamil political parties may have many political-ideological differences among them but when it comes to calls from ‘Big Brother’, they seem to have united or at least pretend to be on the same front.

That call came from the Indian High Commission to facilitate a meeting with visiting External Affairs Minister S. Jaishankar.

Accordingly, almost all Tamil parties representing the North and East were brought under one umbrella. Some leaders who normally avoid their rivals in public too were seen sitting next to each other. The meeting was held at India House on Friday from noon and went on for about 30 minutes with party leaders making quick remarks on the status of talks that are currently underway with the government to find a lasting solution to the ethnic conflict.

Tamil leaders pointed out that there has been no substantial progress on the ongoing talks with the government and some raised concerns whether the government has the political will or is genuine in these attempts amidst mixed signals coming in recent weeks.

Just hours earlier at a joint media briefing with his Lankan counterpart Minister Ali Sabry, Dr Jaishankar reiterated — as usual — India’s stand on the full implementation of the 13th Amendment to the Constitution. President Ranil Wickremesinghe was standing in the middle while the two Ministers addressed the media. (Some senior officials at the Ministry of Foreign Affairs were clueless about the protocol over the President’s appearance as well.)

Outspoken critic of the 13th Amendment, Gajendrakumar Ponnambalam intervened to note that if Tamils accepted 13A, it could be interpreted that the unitary nature of the country was accepted as well while stressing what Tamil people had been demanding was a solution based on a federal structure.

Dr Jaishankar responded that at least Tamil polity should consider 13A as an interim solution for now and “talking about a solution is not a solution at all”.

It was also discussed that there had been some progressive changes in the South as a result of anti-government protests and a common stand could be reached to find a lasting solution acceptable to all the communities in the country.

Dr Jaishankar pointed out that as a foreign country, India could not take on the task of engaging with the South but it is up to the Tamil leaders to do so to reach a common understanding on the decades-long pending issue.

At the end of the meeting, Mr. Ponnambalam handed in a note to Dr Jaishankar. It explained why they were against 13A.

“At a time when Sri Lanka needs all the help it can get, India in particular has more leverage than any other country in Sri Lanka. India by coming to Sri Lanka’s rescue has managed to win the respect of many among the Sinhala people. Our organisation fervently urged India to support the Tamil people in their rejection of any proposal within the unitary state structure and instead support a federal Constitution for Sri Lanka that will recognise and safeguard the Tamil nation and allow the realisation of the Tamil people’s inalienable right to self-determination,” the letter signed by the MP reads.

The Ministry of Foreign Affairs has stressed that it has neither extended an invitation to the Dalai Lama nor received any confirmation of such a visit.

On Friday, the Ministry told the Sunday Times that even though it was aware of media reports on the matter, “the Government of Sri Lanka has not extended any invitation and neither has it received any confirmation about a visit of His Holiness, the 14th Dalai Lama.”

This is in the wake of the Chinese Embassy reacting strongly to reports made regarding an invitation to visit Sri Lanka that had been extended to the Dalai Lama, Tibet’s spiritual leader, by a group of Sri Lankan monks in Bodh Gaya last month.

The Embassy stated that its Chargé d’ affaires Hu Wei had called on the Mahanayake Thera of the Malwathu Chapter of Siam Nikaya, Most Venerable Thibbatuwawe Sri Siddhartha Sumangala Thera in Kandy on January 11 to discuss the matter. 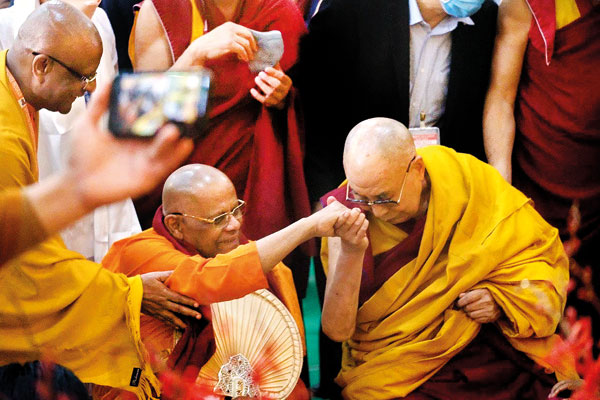 Ven Waskaduwe Mahindawamsa Mahanayake Thera being greeted by the Dalai Lama in India.

Mr Hu had stated that the government and the people of China strongly oppose any foreign country to receive the Dalai Lama claiming that the 14th Dalai Lama is not a “simple monk” as he self-claimed, but the head of the feudal serfdom and the theocracy in Tibet prior to 1951.He described the Dalai Lama as a political exile disguised as a religious figure who has long been engaging in anti-China separatist activities and attempting to split Tibet from China.

However, Ven. Waskaduwe Mahindawamsa Mahanayake Thera of the Sri Sambuddha Sasanodaya Sangha Sabha, who was among the delegation of monks who invited the Dalai Lama, said the Dalai Lama considered the socio-political background of a country before visiting.

“However, we have been informed that the Dalai Lama is positive in regard to visiting Sri Lanka,” the Mahanayake Thera added.

He claimed that China initially had an embassy in Lhasa, the Tibetan capital which means Tibet existed as “a separate state”, with the Dalai Lama as the head of state since “Tibet is a Buddhist country”.

The Dalai Lama is being invited to Sri Lanka, not as a “political leader” but as a “normal monk”, in the same way an important monk such as the Sangharaja of Thailand would be invited, he said.

The prelate added that they discussed the invitation with some ministers, who liked the idea but had warned of “some foreign interference” which could occur.

China-US war of words in Colombo

The Chinese embassy spokesperson issued a media statement titled “China, China, China!” It was a note ridiculing recent remarks by US ambassador Julie Chung who criticised China becoming a “spoiler’ by not coming forward to Sri Lanka’s assistance when it comes to debt structuring.

The whole piece, written in not much diplomatic language, failed to mention the US ambassador by name but levelled many critical questions which needed some answers.

“Isn’t it hypocrisy at its finest for our US colleague to play the blame game instead of a self-examination? After all, why didn’t the US take decisive actions in the IMF for a more comfortable solution for Sri Lanka or extend grant to the island with the rocket amount of US dollars they print every year, instead of sowing discord between China and Sri Lanka? Both Chinese and Sri Lankan people are wise enough to judge without any foreign lecturing who is the spoiler of our development,” the statement read.

Many were not surprised by the response, given China’s aggressive diplomatic stunts in recent times, but the statement failed to provide a clear picture of where the Chinese government stands when it comes to debt restructuring talks with Sri Lanka.

When the 28-year-old parliamentarian Jeevan Thondaman took oaths as the Minister of Water Supply and Estate Infrastructure Development on Thursday, many did not realise that he made history by becoming the youngest Cabinet Minister by breaking the earlier record set by President Ranil Wickremesinghe – before whom he was sworn in. 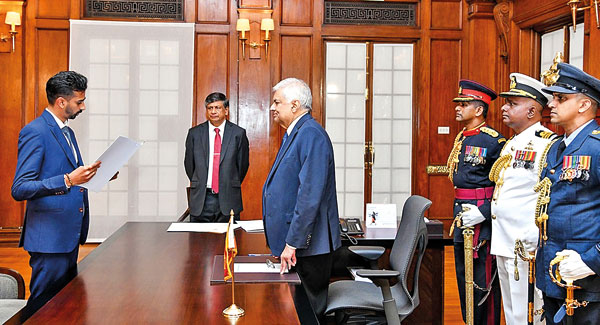 In the J.R. Jayewardene government of 1977, then young Wickremesinghe (29) became Minister of Youth Affairs and Employment setting a new record. Ironically, history was rewritten in the presence of the previous record holder who happened to be the Head of State.

As he took oaths, his supporters in Nuwara Eliya and Hatton marked the event with firecrackers and sweets.

Playing out tourists with a smile

Eight foreign tourists — three children and five adults — boarded the 101 bus from Fort after they exited the Fort Railway Station. Their destination was Colombo’s Gangaramaya.

When the foreign tourists entered the bus, they asked the conductor whether the bus was going towards Gangaramaya.

There was, however, a clear communication gap between the tourists and the conductor, who clearly seemed clueless. It was at this point that two gentlemen in the bus stepped in to help and confirmed the bus would pass the Gangaramaya area.

The tourists then patiently waited to buy tickets and the conductor first collected money from local passengers but appeared deaf to queries from the tourists about how much their fare was.

Again the two gentlemen stepped in to ask the conductor about the fare to the Gangaramaya on behalf of the foreigners. He said it was Rs 50 each, including for every child. However, the normal fare is Rs 40 for adults while children are either given half priced tickets or are not charged at all. The tourists were being overcharged.

The tourists paid the fare without complaining, while the conductor was clearly heard muttering to himself in Sinhala “Yanthan athi, wadipura rupiyal dahayak gaththa megollonwa therumganna gihin” (At least I got ten rupees extra for trying to understand these people).

The conductor then stopped the bus near Colombo City Centre, which is the halt prior to the Gangaramaya and asked the tourists to get down as they reached their destination.

We keep saying how grateful we are to those tourists who are visiting the country, but still some people try to exploit them. Sad indeed.

It was not over any policy disagreement, as one might expect, but over the appropriateness of the way that the State Minister was dressed.

The State Minister was well into his speech during the debate on the Regulation of Election Expenditure Bill when Mr Jayasekara raised a point of order, telling the Chair that Dr. Raghavan was not appropriately dressed to be in the chamber. “He is wearing a bow-tie. That is not allowed in this chamber. Parliament’s attire is either national dress or European dress with a tie,” Mr Jayasekara insisted.

“You’re playing dirty politics. My bow-tie
has become the most important thing for you and not the debate,” a clearly angry Dr. Raghavan said.

“I don’t play dirty politics. You should check with the Secretary General of Parliament as to what you are allowed to wear and what you are not,” Mr Jayasekara shot back.

Dr. Raghavan is one of the SLFP MPs who chose to support the government in defiance of the decision taken by his party and its leader, former President Maithripala Sirisena. It’s no surprise then that there is no love lost between him and the SLFP MPs in the opposition.