By Sandun Jayawardana  Despite vocal protests by the opposition that the Regulation of Election Expenditure Bill was being used as a ploy to delay the upcoming local government election, it was passed in Parliament on Thursday (19) by a majority of 61 votes. Chief Opposition Whip Lakshman Kiriella asked for a division after the government [...]

Despite vocal protests by the opposition that the Regulation of Election Expenditure Bill was being used as a ploy to delay the upcoming local government election, it was passed in Parliament on Thursday (19) by a majority of 61 votes.

Chief Opposition Whip Lakshman Kiriella asked for a division after the government rejected an amendment moved by the opposition at the Committee Stage. The amendment called for the insertion of a clause stating that the “provisions of this Act shall not apply to the elections proclaimed before the enactment of this Act.”

The bill was then passed with 97 votes in favour and 36 against.

The Samagi Jana Balawegaya (SJB) and the National People’s Power (NPP) were among the opposition parties that voted against the bill. Among others who voted against the bill were Prof G L Peiris, Dullas Alahapperuma and Weerasumana Weerasinghe. They are members of the recently formed “Freedom People’s Alliance” — a breakaway group of the ruling Sri Lanka Podujana Peramuna (SLPP). 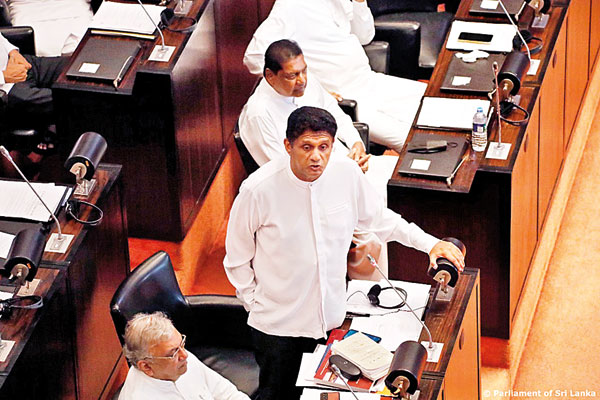 Before the vote, Opposition MPs emphasised that while they agreed with the bill in principle, its timing was a cause for concern. They charged that the government was attempting to rush through the bill with the aim of delaying the local council elections.

Heightening opposition concerns were developments that took place before the bill was presented. At Tuesday’s meeting of the Ministerial Consultative Committee on Justice, Prison Affairs and Constitutional Reforms, it had been resolved to consider the bill after one month.

On Wednesday, however, Speaker Mahinda Yapa Abeywardena announced that there would be a special meeting of party leaders and their representatives that afternoon with the participation of the President and the Prime Minister to discuss matters pertaining to the Bill. 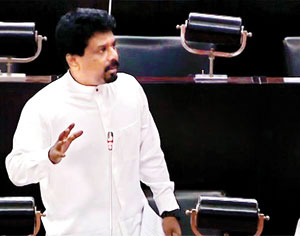 Opposition Leader Sajith Premadasa, Chief Opposition Whip Lakshman Kiriella and NPP Leader Anura Kumara Dissanayake reacted angrily to the announcement, alleging the meeting proved President Ranil Wickremesinghe was blatantly interfering in the affairs of Parliament after the Ministerial Consultative Committee had already decided to put off the debate on the bill. Both Mr Premadasa and Mr Dissanayake boycotted the meeting with the President.

The Committee on Parliamentary Business met later that day, amid opposition protest, and took a decision to debate the bill the following day, Thursday.

Presenting the bill on Thursday, Justice Minister Wijeyadasa Rajapakshe pointed out that the bill had been in the pipeline for many years. He said the bill was necessary to restore the public trust in people’s representatives.

“One often hears people say that corrupt politicians ought to be punished and what they stole should be recovered. The aim, though, should not be to recover stolen assets, but to stop theft beforehand,” the Minister said. “We should have done this in 1994 because we experienced the consequences of it in the 1989 election.”

He said a key aim of the new Act would be to prevent the misuse of state assets during an election. It would also prevent foreign interference in elections, be they from organisations, companies or institutions that might try to ‘invest’ in certain candidates, Mr Rajapakshe said.

Opposition leader Premadasa said the bill had many flaws that needed to be corrected, but “on principle, it was a good thing.”

He said there were many questions about the manner in which it was presented by the government. “Whatever you say, an underhand conspiracy is underway to postpone the elections, citing this bill,” he told Minister Rajapakshe.    He said the government could, nevertheless, easily prove that its intentions were genuine by agreeing to insert a clause into the draft, clearly stating that the Act would not apply to elections proclaimed before its enactment. 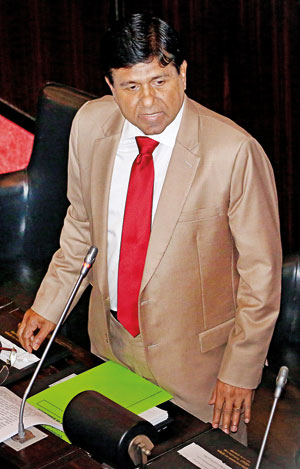 If the bill was adopted without such a clause, any citizen or group could go to court and argue that the local council elections must be held under prevailing laws and regulations, said the Opposition Leader, noting that “Once this Act is approved and the Speaker signs it, it becomes the prevailing law.”

In response, Prime Minister Dinesh Gunawardena said the Election Commission had been repeatedly asking Parliament to expedite the presentation of the Regulation of Election Expenditure Bill. “This bill is essential for both the Parliament and the entire electoral process,” he insisted.

“It was the Election Commission that drafted this bill. Is Parliament going to reject it? Why are we reluctant to adopt a law that compels candidates to disclose undeclared campaign finances and how they were used?” he queried. If Parliament chose to fight over minor issues in relation to the bill, it would be failing in its responsibilities towards the voters, the PM said.    SLPP MP and member of the Freedom People’s Alliance Prof. G.L. Peiris said there was no dispute that such a Bill was needed. “But the issue is that there is strong suspicion among the people, and with good reason, that this bill is being brought in at this juncture with the intention of delaying the local government polls.”

“The bill states that a candidate has 21 days after results are announced to submit a declaration on his election expenses. The Local Authorities Elections Ordinance, meanwhile, states that anyone who wishes to file a petition against a particular candidate must do so in a High Court within 21 days of the election, which is not enough time for them to obtain the information needed to file their petition,” Prof Peiris claimed.

“There is a contradiction and it is one that the Supreme Court has pointed out. Therefore, what needs to be amended first is the Local Authorities Elections Ordinance. Otherwise, this whole exercise is pointless,” he said.

Chipping in, State Tourism Minister Diana Gamage said no country in the world undergoing such a severe economic crisis would even think of holding an election at this time. “The people of this country did not ask for an election at this time. The year 2023 should be a year for reforms, where we can at least lay the foundation for recovery. Why are we trying to spend Rs 10 billion on an election that cannot topple a government?” she asked.

NPP Leader Anura Kumara Dissanayake emphasised that if a government had drained the country’s Treasury to such an extent that it could not even find Rs 10 billion for an election, it really should go home,

“How are they going to feed the people, provide them medicines and other essential needs? They robbed billions of rupees, destroyed the economy, and now say there’s no money to hold the election.

This is exactly why we need an election.”   Mr Dissanayake likened the government’s hold on the country to Somali pirates’ hold on a ship. “They seize and plunder the country and then say there’s no money for an election,” he said.

He charged that the government was trying to delay the election as the results would prove that both the President and the SLPP no longer had a popular mandate.   Parliament reconvenes on February 7.