When you think of a projector, the first image that pops into your mind is probably something that is bulky and cumbersome to carry around, and you’d be right to think so. But, projectors have come a long way since then. In fact, small form factor projectors have been around for a while. It’s just [...]

When you think of a projector, the first image that pops into your mind is probably something that is bulky and cumbersome to carry around, and you’d be right to think so. But, projectors have come a long way since then. In fact, small form factor projectors have been around for a while. It’s just that we haven’t seen them out in the wild. The Asus ZenBeam E1 is one such specimen. 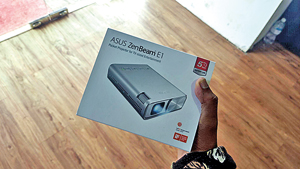 Believe it or not, the ZenBeam E1 is not a new entrant to the Projector market. In fact, it was launched in 2016. It’s just that it was such a niche product that it wasn’t available in most places. So when I got my hands on one, I was immediately excited to try it out. Do I like it? Well, yes and no. Here’s more about the Asus ZenBeam E1; the good, the bad and the cute.

Let’s start with the cute 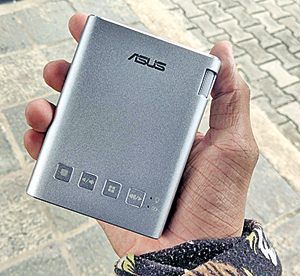 There’s no getting around it. The ZenBeam E1 is cute. The first thing I said out loud was “Ohmygod it’s so cute”. And it truly is. It measures just 110 x 83 x 29mm. Convert that to inches and that’s just 4.3 x 3.2 x 1.1inches. Basically, think of it as being the size of a powerbank. The entire body is constructed of metal and weighs around 300g. It’s not exactly lightweight, but considering the features that it comes with, it’s not too heavy either.

On to the good 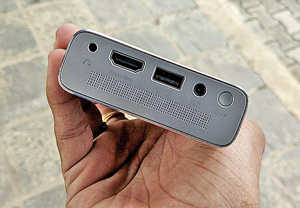 In terms of ports, the ZenBeam E1 packs an HDMI port for display output as well as a 3.5mm audio out in the event you want to connect the projector to a pair of speakers or headphones. There’s also a pair of speakers by ASUS SonicMaster Audio in case you just want to use those rather than external audio. A USB Type-A port gives you the ability to charge your device as well. Yes, you heard that right. The ZenBeam E1 can also be used as a powerbank in case your phone or other device is low on juice. It won’t charge it at blazing fast speeds, because remember, it’s from 2016 and fast charging protocols were still being improved. But if you want to keep your phone alive until you get to your regular charger, then the 6000mAh battery of the ZenBeam E1 is here to save the day.

Because the ZenBeam E1 packs a built-in battery, it also means that the projector can operate off said battery as well. So all you need to do is plug in an HDMI cable (which comes included in Asus’s packaging) to the projector and your PC/Laptop/Console, Chromecast or Firestick and you’re good to go. Asus claims that the ZenBeam E1 can last up to 5 hours on a single charge. That’s almost two movies without breaks or around 5 one hour episodes on your preferred streaming platform. If it is running out of juice, the yellow indicator on the projector turns orange/red and you can use the included AC adaptor to charge the projector and continue using it. 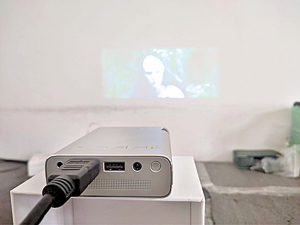 The ZenBeam E1 packs a native resolution of 854×480 (WVGA) and has a maximum input resolution of 1920×1080. So while it can take in a full HD source from a laptop or desktop for example, it will display it at a much lower resolution. It also has a projection distance ranging from 0.5m~3.7m and has a projection size ranging from 16 inches to around 120 inches. But that doesn’t mean you can watch a movie on a 120 inch screen though. In my testing, I found that the 150 lumen brightness of the ZenBeam E1’s lens paired with its 800:1 contrast ratio meant that you would need to use the projector in an almost pitch black room in order to be able to see clearly. Or you’ll need a smaller projection screen. So the wall of my room was the perfect candidate for this. I also discovered that projecting on a white background was significantly better than projecting on to a black/dark one.

So the ideal use case of the ZenBeam E1 is for presentations and in fact, the projector has a separate mode for presentations where it boosts the whites and saturation of the projection in order to make it more readable. So clearly the ZenBeam E1 is meant for the boardroom where you can quickly hook it up to your laptop and present your reports etc without having to look around for power cables and video cables. However, that doesn’t mean you can’t use it to watch movies either. It’s just that you have to get the ambience just right. For example, I found that keeping the projector around 1 meter away from the wall gave me a projection that was around 24-27 inches which was ideal for my viewing and colors were displayed accurately. This distance also makes the best use of the built in speakers on the ZenBeam E1, if you don’t have a pair of speakers or you’re too lazy to plug it in. If I moved the projector farther back, the projection did grow in size, but it also dropped in terms of brightness. While I could adjust the focus on the lens via a scroller on the projector itself, no amount of focus would help if the projection was barely visible. 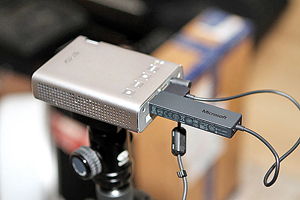 Having said all this, you’re probably wondering how much the Asus ZenBeam E1 would cost, and therein lies the hiccup. Asus retails the device for around $250, which given the current USD rate, comes to about LKR 100,000/-. So it’s not exactly a cheap projector, and it has its pros and cons. It’s portable, can run off a battery and can also be used as a powerbank, but is also almost 6 years old. Standards such as MHL, that the ZenBeam E1 supports are not commonly seen on modern smartphones and the lack of Wi-Fi or smart features also means you cannot use the ZenBeam E1 to cast content from your smartphone or use a supported app either. On the other hand, the HDMI port and USB output make it perfect use for something like a Chromecast or an Asus VivoStick PC as you can use the USB port to power the device and HDMI port as a display input. So it’s as portable as a solution that you can get. 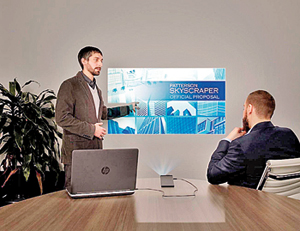