The Budget for 2023 presented to Parliament on November 14 is expected to usher in a competitive market-oriented social market economy. It is expected to increase exports by 100 percent and economic growth to seven percent in 2025.

In the words of the President, the expectations of the Budget are “to usher in high economic growth of seven to eight percent, increase international trade by more than 100 percent of GDP, increase foreign direct investments (FDI) by more than US$ three billion in the next ten years and create an internationally competitive workforce with high skills in the next ten years.”

It was not a popular Budget as in the past. It provided little relief and more burdens on the people. The President asked the rhetorical question: “Should the long-term development of a country be based on popular decisions or the right decisions?”

One of the main objectives of the 2023 Budget was to begin a process of fiscal consolidation. This Budget attempts to reduce the Budget deficit from an estimated 12.9 percent of GDP in 2022 to eight percent in 2023 by increasing revenue through higher taxes rather than the curtailment of government expenditure. Increased taxation is a key feature of the 2023 Budget. 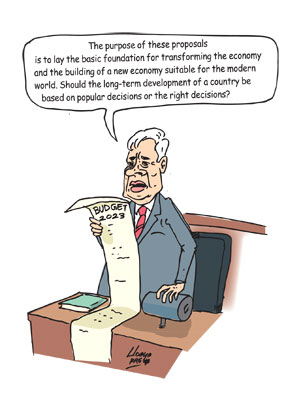 In stark contrast to budgets of the past, there was no a plethora of promises of free benefits, subsidies and reductions in prices. It told the people the Government did not have inexhaustible resources to give away and there were no free lunches as in the past that brought the country to its current fiscal and financial crisis. However, there were safety nets to protect the most vulnerable. Their adequacy and effective coverage of the intended beneficiaries is questionable.

The 2023 Budget did not even reduce some of the burdens imposed by the three preceding tax measures that fall heavily on low income employees whose real incomes have been severely eroded by inflation.

The reduction of the 2023 Budget deficits relies entirely on increasing government revenue, while government expenditure increases. Defence expenditure continues to be higher than the combined expenditure on education and health and is higher than during the civil war.

As to be expected, Opposition members of Parliament, and even some members of the Government, are likely to condemn the 2023 Budget for its higher taxes, labelling it one at the behest of the International Monetary Fund (IMF) and other international organisations and governments. This is either owing to their lack of knowledge or to be popular.

Most surprising are the new projects that have been mooted. These include an international university on climate change and post graduate institutes of medicine.

At a time when the economy is in crisis and the reduction of expenditure and austerity measures are crucial, these capital expenditures are unjustified and demonstrates an insensitivity to peoples’ feelings.

Admittedly they are not as irrational as the large expenditure on white elephants by the Rajapaksa regime. Nevertheless, they flout the need for austerity and frugality on government expenditure.

Another important dimension in the 2023 Budget is its thrust to increase exports. It has an ambitious objective of increasing exports. It aims at “increasing international trade as a percentage of GDP by more than 100 percent.”

It projects a US$ three billion annual growth of exports from new exports from 2023 to 2032 and expects exports to double by 2025.

Among the measures adopted in the 2023 Budget to achieve this is the removal of the prevailing para tariffs that have hindered export growth. Apart from import duties, importers have to pay several charges that make raw material imports expensive. Consequently, costs of exports are high. The 2023 Budget has removed these para tariffs that were introduced at various times to enhance revenue. The 2023 Budget has also simplified import tariffs by introducing a three tiered import duties at 0, 15 and 20 percent. These reforms are expected to enhance our export competitiveness and boost exports.

The 2023 Budget is not a populist one. Its objectives are to lay the foundation for a progressive reduction in the fiscal deficit from an estimated 12.9 percent of GDP to eight percent and to achieve a progressive reduction in the deficit to five percent of GDP in 2025. The strategy to achieve the target in 2023 is by raising revenue rather than curtailing government expenditure.

The taxation policy is not equitable. Personal taxation beginning at just Rs 100,000 a month is considered a heavy burden on employees who are finding it difficult to make ends meet owing to the soaring prices of essentials.

Furthermore, such taxes do not capture rich income earners who avoid and evade taxes on their high incomes. There has to be tax reforms that fall on the affluent. Perhaps wealth and property taxes may be introduced later.

A disappointing feature of the 2023 Budget is the lack of curtailment of government expenditure and new capital expenditure that is inappropriate in a time of austerity.

Achieving the objectives and expectations of the 2023 Budget is a tough task. Will the Budget deficit be contained at eight percent of GDP or increase owing to overruns in expenditure, shortfalls in revenue and slow growth of the economy?