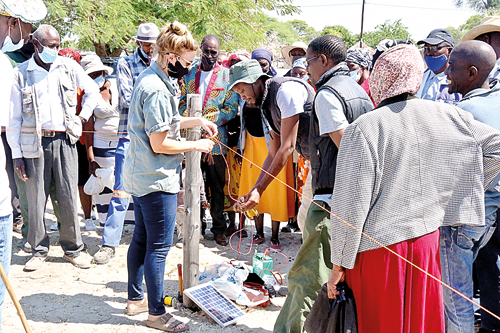 Working with the community: Dr. Adams in Botswana

This week in Sri Lanka was a messenger of hope, for all Sri Lankans who feel the tears and sorrow of villagers facing death, injury and raids due to wild elephants and also are shaken by the horror of the cruelty inflicted on these majestic creatures in the form of hakka-patas which rip open their jaws or planks with nails which get embedded into their feet and cause a slow and excruciating death.

“Not only can we (humans and elephants) live together but we should. This is because protecting the elephant protects the whole ecosystem underneath as elephants are the umbrella pioneer species and play the role of landscape engineers.”

This is the simple but powerful message from Dr. Tempe Adams, the Coexistence & Education Coordinator for ‘Elephants Without Borders’ (EWB), a non-governmental organization (NGO) based in Botswana dedicated to protecting and conserving Africa’s elephants.

Dr. Tempe was in Sri Lanka to deliver the monthly lecture of the Wildlife and Nature Protection Society (WNPS) titled ‘Living with the world’s largest elephant population’ on Thursday at the Jasmine Hall, BMICH. 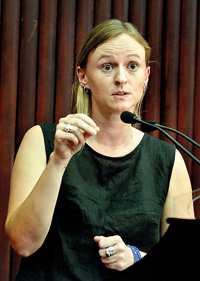 Working out of northern Botswana’s Chobe District known for its high savannah elephant population, Dr. Adams guides communities on how to live and farm, with the strong proviso of doing so conflict-free. Here an estimated 32,000 elephants live in close proximity especially in the dry season to a growing human population of 30,000.

Science and community empowerment have been interlinked by EWB to create the ‘Side-by-Side Elephant Coexistence Programme’.

“We have created the ‘EleSenses’ toolkit, a low-cost, user-friendly, mobile, solar-powered/green, sustainable, mitigation system aimed to protect human lives and property,” says Dr. Adams, explaining that they have been conducting long-term studies monitoring elephants and wildlife movements across the landscape. Crucial corridors have been identified by the movement of wildlife between needed resources particularly water. “This vital information is shared to incorporate corridors into land-use management plans.”

The ‘EleSenses’ toolkit targets the five senses of the elephant – an alarm system for its ‘hearing’; an electrical rope for its ‘touch’; a cocktail of repellents for its ‘smell’ and ‘taste’; and solar flashing lights for its ‘sight’.

She reiterates that conflict resolution does not happen instantly. It must be worked on over time, through rigorous science and the building up of relationships.

Growing up in rural Australia on farms, while following environmental science at the University of New South Wales, Africa had beckoned and young Tempe would save up and go to this different world during the summer holidays, doing internships with various organizations.

The conflict-resolution programme of EWB has a heavy research grounding based on the range expansion of elephants, population counts, how they use ecosystems, population declines and also elephant ecology.

When asked the challenges in implementing a coexistence programme, Dr. Adams says that it is important to understand the actual reasons behind the human-elephant conflict. The reality versus perception, as there could be a mismatch between its portrayal by those living outside such areas and people living with elephants.

She says that in some of the biggest conflict hotspots, there has been huge funding to ease the conflict with big consulting contracts but there is nothing to show for it. These organizations have come in and left and because of this people are reluctant to get involved.

“When I started assessing living with wildlife, there was such reluctance and gaining the people’s trust took some time. Elephants die, people can die and livelihoods get affected. There is frustration and sadness. It is tragic and difficult to process. So it is important to give a voice to people. There is a need to hear them out because their perspective and experience is important. The elephants’ story is also the people’s story, these are the drivers of conflict,” says Dr. Adams.

She measures the success of the programme from the increasing demand. “We started out struggling to recruit villagers into this programme, now we have so many.”

“Not a single elephant has been killed in the last season,” is a trunk call to the ears of Dr. Adams who coaxes farmers to self-reflect and self-adapt to keep improving the situation.

When asked how Sri Lanka can handle its conflict, she says that it is hard to give advice as conflict looks different to different people, but she is excited to share experiences and exchange information.

Sadly, Sri Lanka has the most incidence of HEC among countries in which the Asian elephant roams. As human populations and development have increased, elephant habitat has decreased. Unplanned development, illicit deforestation and illegal encroachments into Protected Areas (PAs) have been spotlighted as the culprits. More than 40% of the country’s landscape is shared by humans and elephants.

Dr. Adams is currently on a visit to Walawe’s Elephant Transit Home and also some locations to see the workings of the experimental elephant-repelling light system.

A taste of healthy goodness in town