There are two certainties in your life,” said N.R. Gajendran, a Tax Consultant and a Senior Partner at Gajma & Company, at the seminar on “Current Tax Reforms in Sri Lanka: Would we be able to pay?”. Mr. Gajendran continued elaborating the two certainties in life, a famous quotation used often: “The first, you pay [...]

Taxpayers inside, beneficiaries outside! 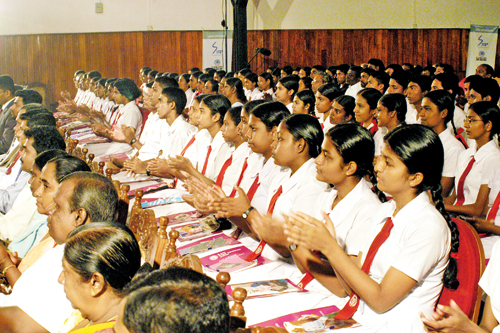 Students are beneficiaries of an obsolete tax system.

There are two certainties in your life,” said N.R. Gajendran, a Tax Consultant and a Senior Partner at Gajma & Company, at the seminar on “Current Tax Reforms in Sri Lanka: Would we be able to pay?”. Mr. Gajendran continued elaborating the two certainties in life, a famous quotation used often: “The first, you pay taxes throughout your life and, the second, one day you will die”.

The seminar was held recently at the Seminar Hall No. 128, in the Arts Faculty building, University of Colombo. It was attended more by the staff than by the students. After seeing that about two-thirds of the hall was still empty, and that many students were chatting and walking on the corridors outside the seminar room, participants who came to the seminar had questions and comments.

Someone asked: “Why are we only here and not the students?”

Another replied: “We are here as
the taxpayers; they are outside as
the beneficiaries!”

The seminar panel moderated by the Head of Political Science Pradeep Peiris, comprised Senior Deputy Commissioner of the Inland Revenue Department Eranda Kodithuwakku, Prof. in Economics K. Amirthalingam and myself, in addition to Mr. Gajendran.

According to a new income tax schedule implemented from this month – January 2023 – a person who earns more than Rs. 100,000 on average must pay income taxes. New tax rates now vary from the minimum 6 per cent to the highest 36 per cent. The personal income taxpayers are those who have a “tax file” maintained at the Inland Revenue Department.

Accordingly, many of the employees in the public or private sectors, self-employed persons doing their own work, professionals such as doctors, lawyers, engineers, traders, brokers, tuition teachers, businessmen who run own businesses and, of course farmers — all may have to pay income taxes, depending on their income levels.

Taxpayers in this country are angry, not only because of an increase in taxes to such high level, but also because only about 500,000 people out of 22 million population pay taxes, as of 2021. Income taxes are paid by the employees working in the public and private sectors and a fewer number of people who have voluntarily declared their incomes. This means there are millions of “free riders” who evade paying taxes but receive the benefits of the government revenue. Accordingly, just the few 100,000 taxpayers have to bear not only the burden of high taxes, but also the burden of free riders.

Equality and efficiency are the top-most important tax principles. Equity principle refers to the fair distribution of a tax burden among the people. In a country with a few hundred thousand taxpayers out of millions of tax evaders, there is no fair distribution of tax burden. A fewer number of taxpayers take the burden of paying excessive taxes. However, the benefits of spending of tax money in terms of education, health care, law and order, civil administration, infrastructure and many more are shared equally by everybody.

Efficiency refers to the fact that taxation should not discourage economic activities of people – investment, production, business, working, exchange and consumption. When the tax rates are exorbitantly high, then these activities get discouraged and the economic performance of the country would slow down. The end result is worse than it was. Contraction in economic performance, which affects the well-being of the society, would also reduce tax revenue as well.

The share of direct taxes, which include taxes on income, profits and capital gains, continued to be much lower in Sri Lanka, which was around 15 – 20 per cent in the recent past, than in many of our neighbouring countries. For instance, in 2020 it was 45 per cent in India and Malaysia, 38 per cent in Singapore and, 30 per cent in Thailand. The Budget 2023 with an increase in income taxes, anticipate raising the income tax share to 27 per cent of the government revenue.

When a country has an overwhelmingly large indirect tax share, it could violate both the equality and efficiency principles, and deter the country’s development prospects as well. A poor person and a rich person, both pay the same VAT, import duties, excise duties and other taxes for the same good or a service they buy in the market. As it disregards income inequality, indirect taxes affect the poor more than the rich.

As the income tax share is too small, however, the government faces a policy dilemma. On the one hand, the fiscal policies must be directed at lowering the indirect tax rates and eliminating multiple taxes in order to facilitate economic growth. On the other hand, it cannot be done without raising the direct tax revenue base.

As the government doesn’t know people’s income and wealth, neither does it have a way to know who should pay taxes and how much the tax would be. As a result, those few people who pay taxes among millions pay taxes at high rates. As the direct tax share is significantly low, the government also has to depend more on indirect taxes.

After long years of implementing an obsolete tax system without proper upgrading Sri Lanka has learnt big lessons. A tax system based on digitalised information would enable Sri Lanka not only to expand its tax base and to lower tax rates, but also to promote economic recovery and to fight corruption. We shouldn’t forget that in addition to improving fiscal consolidation, reducing “corruption vulnerability” is also an IMF conditionality that has already been recommended as part of the forthcoming IMF agreement.

(The writer is a Professor of Economics at the University of Colombo and can be reached at sirimal@econ.cmb.ac.lk and follow on Twitter @SirimalAshoka).

Power stakeholders to use their rights to deter price hike

Retailers’ Association raises growing concerns about the state of this sector