By Thalif Deen UNITED NATIONS (IDN) – A longstanding proposal for a nuclear-weapons-free-zone (NWFZ) in the politically and militarily volatile Middle East has been kicked around the corridors–and committee rooms — of the UN since the 1960s. A joint declaration by Egypt and Iran in 1974 resulted in a General Assembly resolution. But it never [...]

A nuclear-weapons-free zone in Middle East remains a fantasy

UNITED NATIONS (IDN) – A longstanding proposal for a nuclear-weapons-free-zone (NWFZ) in the politically and militarily volatile Middle East has been kicked around the corridors–and committee rooms — of the UN since the 1960s.

A joint declaration by Egypt and Iran in 1974 resulted in a General Assembly resolution. But it never reached the stage of political reality.

UN Secretary-General Antonio Guterres looked at the brighter side of the proposal last week when he welcomed “the successful conclusion” of the Third Session of the Conference on the Establishment of a Middle East Zone Free of Nuclear Weapons, which took place from November 14 to 18 at the United Nations Headquarters in New York. 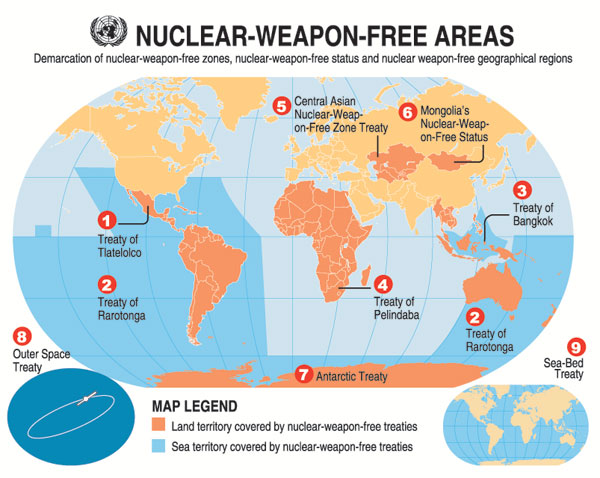 Guterres congratulated the participating States of the Conference under the Presidency of Lebanon “on their constructive engagement towards the elaboration of a future treaty”.

And he encouraged them to continue their work during the inter-sessional period, and supports their “continuing efforts to pursue, in an open and inclusive manner, the establishment of a Middle East Zone Free of Nuclear-Weapons and Other Weapons of Mass Destruction.”

Currently, there are nine nuclear powers, including the five permanent members of the UN Security Council, namely the US, the UK, France, China and Russia, along with India, Pakistan, Israel and North Korea.

Israel is the only nuclear power in the Middle East, with Iran close behind, while Saudi Arabia and Egypt have indicated, off and on, an interest in going nuclear.

Dr Ramzy Baroud, author and editor of the Palestine Chronicle, told IDN “while one welcomes any initiative by the United Nations to establish a Middle East zone free of nuclear weapons, history teaches us that such gestures are at best symbolic.”

Worse, the US-led international community has politicised the issue of nuclear proliferation to the extent that countries such as Iran are being sanctioned in advance for allegedly aspiring to develop their nuclear capabilities, while a country like Israel is known to have already developed nuclear heads, estimated at anywhere between 90 and 400, he pointed out.  In the October 31 UN General Assembly (UNGA) vote, the US and Canada were among only five countries — including Israel itself — that voted against a resolution that calls on Israel to dispose of its nuclear weapons and to place its nuclear facilities under the monitoring of IAEA.

“Alas, we know that this will not happen anytime soon, thanks to the US-western backing of Tel Aviv.”

“So, calling for a nuclear weapons-free zone in the region remains a hollow call considering that the US is only interested in curtailing the nuclear ambitions of countries that are considered enemies of Israel. This cannot be a starting point of an ethical conversation about weapons of mass destruction, and cannot possibly succeed,” declared Dr Baroud.

Dr Alon Ben-Meir, a retired professor of international relations at the Center for Global Affairs at New York University (NYU), told IDN the efforts by the UN General Assembly (UNGA) to implement a nuclear weapons-free zone in the Middle East have failed time and again for several reasons.

To begin with, the focus has always been on Israel, which is believed to be the only Middle Eastern country in possession of nuclear weapons but is not a signatory to the Non-Proliferation Treaty (NPT).

From the Israeli perspective, as Israeli deputy ambassador to the UN Michal Maayan said, the NPT is only as relevant as the level of compliance and offers no solution to the “unique security challenges” of the Middle East, said Dr Ben-Meir, who taught courses on international negotiation and Middle Eastern studies for over 20 years.

These unique security challenges as the Israelis see them are first, that Israel is not recognised by the majority of the states in the region, and several of them have been declared enemies of the State of Israel, he noted.  Second, Iran, which ironically is a signatory to the NPT, is pursuing nuclear weapons and is in possession of large quantities of highly enriched uranium. From the Israelis’ perspective, Tehran poses an existential threat to their country. There also still exists undeclared nuclear activities in Syria, which is of great concern to the Israelis, he said.

Finally, Israel’s concerns over its national security both from the Jews’ historical experience and Israel’s contemporary security perspective are of paramount importance.

“It has further refused to be a signatory to the NPT and certainly has and continues to refuse to dispose of all its nuclear weapons and place its nuclear sites under the International Atomic Energy Agency as the UNGA is demanding.”

Thus, as long as these conditions continue to exist, and there is no comprehensive peace agreement between Israel and all the states in the region including Iran, the prospect of establishing a Middle East free of nuclear weapons and other weapons of mass destruction will remain an illusion, he declared.  One other extremely important move that can help accelerate the process of making the Middle East free of nuclear weapons is for the US to guarantee by treaty the security of its friends and allies in the region by providing them with a nuclear umbrella.

Such a measure could dissuade Iran and other countries who aspire to acquire nuclear weapons from pursuing such a dangerous path, he added.

According to the United Nations, there are currently five Nuclear-Weapon-Free Zones (NWFZs), covering territories in most of the Southern Hemisphere and in Central Asia. Antarctica and Mongolia have a special nuclear-weapon-free status as well. As described by the Secretary-General in his Disarmament Agenda, “Nuclear-Weapon-Free Zones are “landmark instruments” that represent an excellent example of the synergy between regional and global efforts towards a world free of nuclear weapons”.

“Although Nuclear-Weapon-Free Zones should not be considered ends in themselves, each of these regional agreements adds significant value to the collective efforts to achieve a more peaceful and stable world”, according to the UN.

Discussion – End the Last Colony in Asia: Justice for Palestine

Global health is the best investment we can make