By Upali Amarasiri While appreciating the valuable article in your esteemed newspaper on November 13, kindly allow me to clarify matters as far as I understand them as chairman and member of the National Library Committee of the National Library and the Documentation Services Board (NLDSB) for many years. In January 2017, NLDSB was allocated [...]

National Library renovation: Another side of the story

In January 2017, NLDSB was allocated Rs 500 million by the Department of Budget to upgrade the National Library. Of which Rs 400 million was for refurbishing the present building and constructing an additional building while Rs 100 million was for furniture. Therefore, it is incorrect to give credit for refurbishment work to the Ministry of Education (MOE) or its ‘Nearest School is the Best School’ (NSBS) project.  For some reason, NLDSB opted to use the NSBS project office to coordinate the National Library project.  With its resources and facilities, NLDSB could have easily handled the project by itself. In hindsight that would have been the better option considering the poor services provided by the NSBS and the unnecessary complications caused as a result. 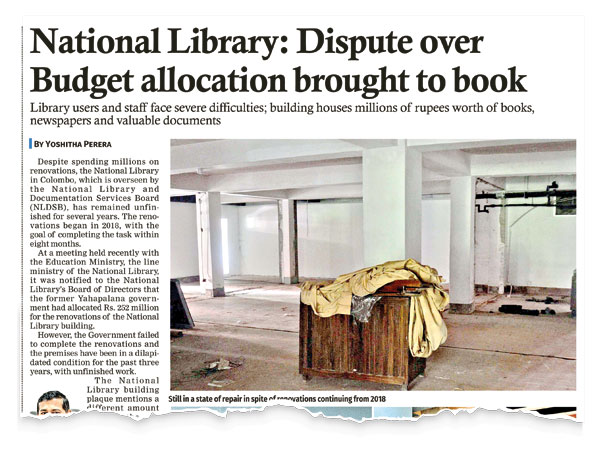 In the article, the NLDSB Director General blamed the Government for failing to complete the refurbishment project. As he admits, the project was based on the ‘Design & Build’ method. The contractor and the client are the crucial components of this method, unlike the traditional method of the measure and pay procurement system. Therefore, as the client, it was the responsibility of the NLDSB to complete the project together with the contractor. The Treasury has done its part by releasing Rs 211 million, the expended funds for the project, in two instalments.

He also claims that the renovation was halted with the change of government in November 2019. This is not true. The project had already been halted due to the exhaustion of the funds, with a substantial amount of work remaining. The fault was apparently due to bad planning or unprofessional management of the project or both.

The Director General further claims that the present Government is prepared to resume the project. This is good news if true. However, according to a senior official who participated in the 2023 budget discussion at the Treasury, the request for further funds by NLDSB was rejected, not a surprise, given the present situation. When NLDSB officials complained about the threat to rare books and the palm leaf manuscript collection due to the unfinished project, they were advised to transfer them to the National Archives. In my opinion, this is not the first time that the NLDSB DG managed to paint a rosy picture of a dismal situation. This is perhaps one reason why the NLDSB Board of Management has so far not realised the gravity of the situation.

As the main building and its interior layout had been scientifically planned in the 1970s by an internationally renowned UNESCO consultant architect, only renovation and modernisation were necessary.

However, the refurbishment team completely changed the layout of the building and transformed it from a National Library building of high standard to a common Public Library building. The secured area in the core of the building for the library collection was removed. This area is an essential feature of any national library. It had been masterly designed by the UNESCO consultant to protect the collection from natural elements in a tropical country with the necessary climate control facilities to suit the requirements of paper, audio-visual and digital material. As a result, readers are now allowed into the stack areas without any restrictions.

From the point of view of the functions of a national library, these new interior arrangements flouted the basic principles of national library designs. Under the new plan, the large windows of the reading rooms were also removed and the building was covered with fixed glass with the intention of air-conditioning the entire building. But this is not a smart idea considering the high electricity bills and small annual allocation received by the NLDSB. Apparently, the NLDSB management has not fulfilled its professional obligations towards the project and allowed the officials of the NSBS unit and the architect to plan the interior of the library as they wish.

At the inauguration of the refurbishment project held in 2018, all guests including myself were provided a large hammer to break a piece of the wall at the auspicious time. I politely refused the honour. It was an emotionally fraught moment for the National Library staff who knew the value of the core stack area.

Later when the construction workers were trying to demolish the thick interior walls, it was reported that some National Library officers protested and prevented the demolition, saying that this was an essential part of the library. Then the contractor and the NL management had to summon MOE officials who had threatened disciplinary actions against some of those officers. Apparently, a senior Maintenance Division officer has been served a letter of warning by the MOE due to this.  A senior officer told me last week that she was still suffering from severe mental trauma after witnessing the destruction of the beautiful mural on the interior wall of the National Library. This mural was painted by an award-winning team of schoolchildren in the 1980s, depicting the fauna and flora of the country.

NLDSB should have provided the original building plans and the architect’s concept prepared in 1974 by UNESCO Consultant Architect Prof. Micheal Brawne to the new architect and design team. They should have also prepared and provided a ‘Client’s Brief’, a thick volume with a detailed account of the specific requirements of each section, floor, and area of the NL building. The senior management should have also sought the assistance of two main Advisory Committees of the NLDSB, the National Library Committee and Conservation and Preservation Committee, and further consulted senior library professionals and the Sri Lanka Library Association, the professional forum of the field.

It is unfathomable why the original building plans were not submitted and explained to the architect. When asked about the ‘client’s brief’ the reply was that the entire senior staff provided advice on the professional requirements of the library and other advice verbally. If true, it is a poor substitute for a comprehensive document prepared by a panel of senior professionals. It is also rather unbelievable that the two main advisory committees were kept in the dark. Both committees consist of experienced senior library professionals, senior National Library administrators, experts in conservation and preservation of library materials and others. The National Library Committee has indicated in its correspondence with the NLDSB management that the project was mishandled from its inception.

At the request of the previous NLDSB chairman, the Engineering Services Department of the Western Provincial Council has studied the renovation project and submitted a report. Later the National Library Committee was informed that one finding of the report is the huge gap between the expenditure and the actual work done.

Since the Treasury allocation is for both refurbishment of the present building and a new additional building, the NLDSB management should have prepared the plans for both the refurbishment and the new building simultaneously. In that way, it would have been much easier and practical to refurbish the existing building, keeping in mind the additional space that the National Library would acquire in the near future.

Due to these crucial failures, the NLDSB management should accept full responsibility for the present unfortunate situation.

In the new interior design, a few enclosures have been introduced to deposit the rare and valuable materials in the collection. These few enclosures are totally inadequate for the collection which comprises 47 private collections acquired from eminent Sri Lankans, in addition to the legal deposit collection and other rare and vulnerable materials. And the Conservation and Preservation Advisory Committee discovered that the hay boards used to construct the new enclosures are unsuitable for a library as they are inflammable and attract insects, both arch-enemies of libraries. The committee also pointed out that UV rays coming through the glass panels in the enclosures are harmful to library materials.

As a result of the removal of the climate-controlled core area and the natural air circulation in the rest of the building as in the original plans drawn by the UNESCO consultant, it becomes mandatory for the temperature and relative humidity of the entire building to be controlled by an advanced Heating, Ventilation and Air-Conditioning (HVAC) system that is monitored daily and properly maintained.

However, as a cost-cutting measure due to the shortage (or mismanagement?) of funds, the refurbishment team has finally decided not to climate control the entire building. This has had a drastic negative effect. Instead, the contractor repaired the existing AC system and used it to provide AC only to the enclosures where part of the collection is kept. The rest of the building, including the areas where the rest of the national collection is located, the reading areas, and the staff area, are left with neither climate control nor windows for air circulation.

It is very doubtful that the ongoing venture with the State Engineering Corporation (SEC) will be successful as the NLDSB management still refuses to concede the grave errors of the renovation plan. With the news of the involvement of the SEC to prepare a report, I sent a letter on 30th October to the Chairman/NLDSB with a copy to Secretary/MOE requesting submission of the report to the ministry only after first consulting the advisory committees. Our advice was not heeded.

The most important function of the National Library is to secure its valuable collection for future generations. Its second and third responsibilities are to provide a comfortable environment for readers and the staff. Through this failed renovation, all such responsibilities have been compromised. One can hardly imagine the desperate situation of the once-thriving National Library of Sri Lanka.

Who pays for climate change?